I now have a professional excuse to read food blogs (more on that later). A post by Michael Ruhlman last week about why people cook, or do not cook has kept me ruminating this week. And then Culinate.com featured a piece about eating-in and solicited comments from readers about memorable experiences of staying home and cooking instead of opting for take-out or going out to eat.

I can think of dozens of reasons why I cook but I think the fundamental one is that I love preparing food for the people in my life. I started cooking at a very young age, in part because my mother suffered from severe migraines. When she was laid up, I often cooked for my siblings and father. And even though I remember those days without my mother bustling about and taking care of us, as quiet, sad, and just wrong, I also remember the joy and pride with which I served dinner. From then on, preparing food became the go-to-gift for all occasions.

And then there’s just the everyday cooking, the nightly dinners that are so part of my routine that if I don’t cook for two or three nights I start feeling a little antsy. It’s not that I don’t love to go out to eat. Eating out is in fact one of the things I miss most about my pre-child life. However, since we don’t  go out much any more, I have daily opportunities to enjoy the process. And I have a most appreciative eater in my husband, and more often that not, in my son as well. My son recently turned three, which was a great reason to bake cinnamon rolls, muffins, a chocolate birthday cake, and lots of savory snacks too.

Today, my kitchen looked like a production kitchen. I had a few hours to myself and the result was a double batch of muffins and a triple batch of granola. Now we’re stocked for after-school-snacks and breakfasts for two weeks. 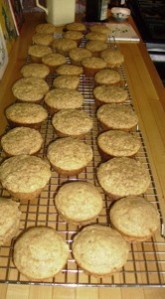 The second batch of muffins was baking and the kitchen smelled of cinnamon and I was wrist-deep in granola, oily hands covered with pumpkin and sunflower seeds and oats, and loving it. I love the process. I love the smells and the toasty clumps I nibble as soon as the granola is out of the oven. I love the creativity. (I have become a bit of a pathological substituter–sometimes because I don’t have  all the ingredients, but sometimes also because I like to tinker with the original.) And I do like to eat, so the consumption part is a joy too.

Speaking of results and creativity, the granola I made today was inspired by a recipe from Lottie + Doof , one of my favorite food blogs.  I’ve been making this variation for several months now and it illustrates another reason I love to cook. I could never afford to buy this kind of granola at the store. With a few tweaks to the original recipe (I omit the pecans and use applesauce for part of the olive oil called for) I can make six pounds of granola for about $15 by buying products in bulk from Azure Standard and making it myself (active time 10 minutes!)

These are just a few of the reasons why I cook. I’d love to hear why you do or don’t!

Preheat oven to 300°F.
Place dry ingredients in a large bowl and mix until well combined. Mix honey, maple syrup, olive oil and applesauce in another bowl and then stir into dry ingredients. Spread granola mixture in an even layer on a rimmed baking sheet. Transfer to oven and bake, stirring every 10 minutes, until granola is toasted, about an hour. It should be nice and golden brown. Remove granola from oven and let cool completely before serving or storing in an airtight container for up to 1 month.